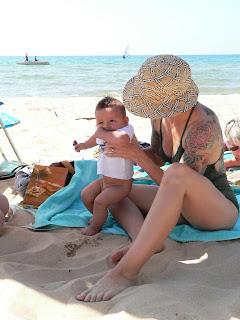 We had a perfect day at the beach. Looks an awful lot like that last shot, but if you look closely you can tell it's the lovely Lake Michigan.

Email ThisBlogThis!Share to TwitterShare to FacebookShare to Pinterest
Labels: Mid-West

Last weekend: taking in the ocean one last time 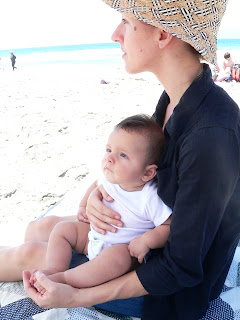 Email ThisBlogThis!Share to TwitterShare to FacebookShare to Pinterest
Labels: California

Tell me, child, what is this sleep regression all about?

I am not a fan of imposing strict sleeping schedules, nor do I subscribe to the cry-it-out school of sleep philosophy, but I thought I might gently try to eliminate the middle o' the night feeding. You know, to train the little guy not to expect it. I'm allergic to parenting literature, but I've heard that, after a few nights of hell, this tactic can deliver us to a utopia of consistent sleeping through the night. Did I say consistent? Ha!

The first night went off without a hitch, and I just rocked Auden back to sleep after minimal fussing, feeling triumphant and a little smug. Not so bad, I thought. The next night was not so easy. He cried, and I caved. Is this the hell? I wondered. Man, I'm a lightweight.

In the light of day it was not so easy to explain, but again the next night I could not bear to refuse him. It felt cruel and arbitrary and control-freak-ish.

He doesn't know, he's just hungry! Damn! Give a baby a break!

(That was an exerpted transcript from my very own version of Baby Whispering, called "Listen to Your Kid, Don't Project Your Adult Expectations for Uninterupted Sleep onto a Creature Whose Stomach is the Size of a Golf Ball")

I talked to Jason about it, asking him what he thought I should do. Like a smart man, he asked what I thought I should do (possibly knowing I already had a preference, possibly just wanting to defer to mama's intuition and wisdom. Like I said, smart man). I said I would rather wake up and feed and go back to sleep within twenty minutes than wrestle with a squirming, screaming babe for forty-five.

So then on Sunday we were listening to the best radio program ever, the subject of which just happened to be "Fear of Sleep," right? And since we don't have roaches crawling in our ears, an infestation of bedbugs, or somnabulant activity a la Incredible Hulk (really, you should listen to this episode), I figured we should count ourselves lucky. But that night Auden woke up every two hours, like a flashback to his first month of life that I couldn't help but feel was kind of cruel and arbitrary. I was crying into my pillow by 5am, with Jason mumbling sleepy reassurances.

In previous weeks, babe had been sleeping a good six hours at a time, and then maybe three or four hours after that, and holy Hypnos is it painful to slide backwards from such progress. It was torture. Really, don't they do that to torture people?

Email ThisBlogThis!Share to TwitterShare to FacebookShare to Pinterest
Labels: baby, not sleep

Nowadays I get smiles for just existing. Still rewarding, of course, still meltingly cute, especially from across the room. But Jason has coaxed forth the highly elusive baby giggle, caught here for the first time on video:

we called him 'Grover' in utero

Carrying on in a fine tradition of calling my baby anything but his name, here's what we call Auden around here:

And you thought we were really going to name him Grover, how silly!