We've got a sweet new ride: 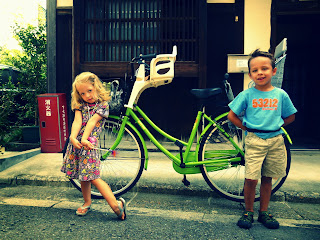 Buses & trains are fun and all, but THIS is freedom. 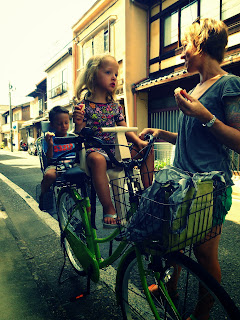 I used to marvel at the women biking around with multiple children strapped in to bike seats -- the Japanese Minivan. Now I AM THAT MAMA, god help me. And god help you, too, if you're walking or biking toward me. 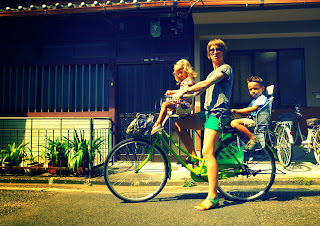 So. The way to get to Japan is: 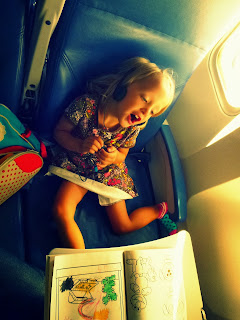 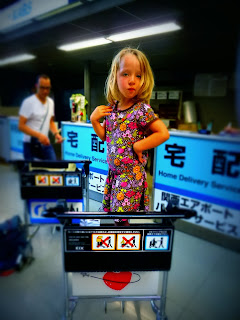 And suddenly, we are inside a tiny garden which is inside our house, on the other side of the world. 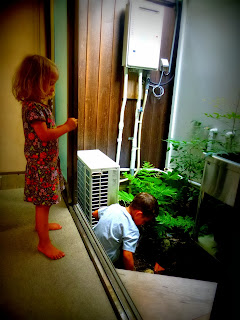 But, you know how you can't quite put your finger on it... Something vaguely medicinal? Something like damp tatami? 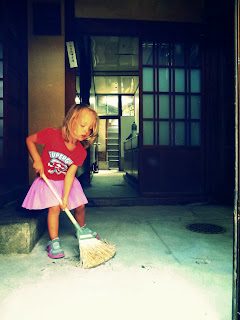 Everything is a jumble of memories... streets, sounds, words that surface before their meaning. It's overwhelming. How can I tell a coherent story? At least we are now sleeping through the night. 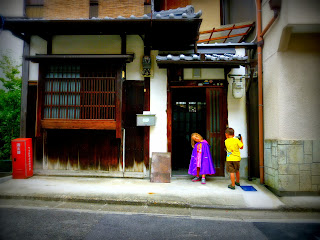 The streets are unbelievably clean. Our neighborhood is a labyrinthine network of narrow passages, the thing that so enchanted me before, this quiet, fragrant maze. 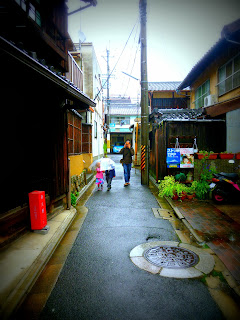 I am almost compulsively visiting familiar places, routes, habits; eager to be oriented, I suppose. But it's more like I have to reconcile the notion that I could go back to those places... which I can't. 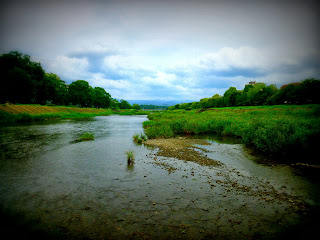 We played in the river today: the kids build guilelessly with rocks, while I contemplate the origin and the history of each one.

What I remember about this city is that its magic worked whether I was willing to believe or not, and I was transformed by it despite myself. Only a fool would get the same magic trick twice! 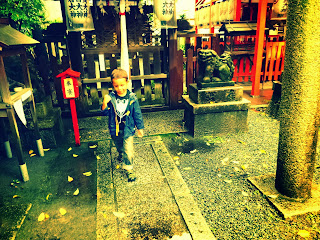 It's funny -- I'm at the same time more confident and more humble now than I was before. I used to try to maintain an aloof separation from other foreigners here, which is of course the mark of any insufferable gaijin. Now I won't conceal my curiosity or my magnanimity. Big, wide smiles! Knowing nods, which really mean, I don't know anything more than you do. I swear. 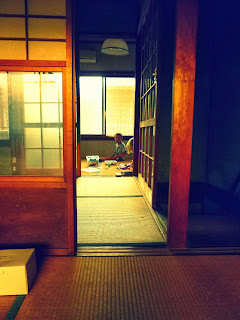 I was in a terrible mood the other day, wrangling whining children through the hubbub, resentful of the food I don't like and the language I can't fathom, and a little voice inside said, Don't waste your time feeling this way.

And I continued to have my quiet fit for a few more hours, but I knew it was right, that voice, because the sun was warm and we finally got a refrigerator and we discovered how to tease koi fish with pebbles, and there will be a rhythm soon, and I will feel silly for having wasted entire mornings fighting against the current. 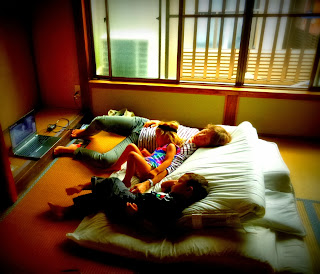 But that's true no matter where we are.