I'm not sure why, but November is always a good month for me, creatively speaking. In the last couple of weeks I've been spending more time at the art table, even if it's only for 10 minutes at a time.

I worked some more on the B500 bone piece: 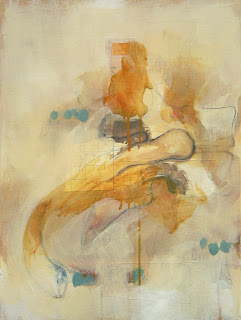 Covered up the weird green color that I didn't like on this double lumbar bone piece: 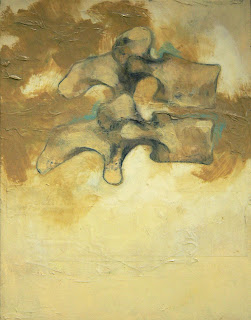 And dabbed some more muted colors on these bones pieces that were already in the works: 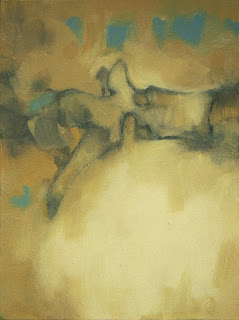 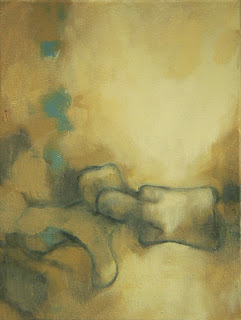 I feel insane sometimes trying to make time for this in the midst of non-stop baby wrangling -- Auden's yapping at my heels as I type, cementing my authenticity -- but I just can't NOT make art.

Email ThisBlogThis!Share to TwitterShare to FacebookShare to Pinterest
Labels: painting

Okay, I guess technically you're closer to ten months, but I'm too busy (with you) to write (about you) in a timely way.

But I'm saying nine months because you really did start walking at 9 months, and no one can believe it because you are so tiny. You clear the dining room table as you gleefully stagger through the room. Your preference is to be holding something in your hand while you walk, especially if it makes noise. You love to be chased, which is hilarious because you can't run, and you can't even walk faster, so you just flail your arms out in front of you and giggle madly when I'm on your heels. You show the same utter delight in climbing the stairs.

You have discovered that the adults keep anything worth having up on high shelves, so you demand to be picked up, and then you point with your tiny finger at everything up there that you like, huffing excitedly with your mouth in a perfect "O".

You love to tumble. We have to have at least one good wrestling session per day, and it's preferable if we also do some contact improv on the bed. You love it when I push you with my head; you laugh so hard you give yourself the hiccups, every time.

You love reading books. I feel guilty now that I waited so long to sit down & read with you, because it's face-meltingly adorable how you growl at every picture of a lion that you see. Auden never had the patience you have; you like to read them again and again and again.

You love eating, too! You would probably subsist entirely on Goldfish Crackers if I let you. But you like vegetables, too. And I'm not sure, but I think you deliberately signed 'milk' today.

The sleep issues are marginally improved -- now you're only waking once or twice a night. I am no longer tearing my hair out, determined to DO SOMETHING about it. It helps that I don't mind letting you cry a little. I have reached the Grim Acceptance phase of this struggle, and am just counting my blessings that you nap well. I can put you in your crib, sing a song, and then walk out of the room. Compared to the excruciating rocking-strolling-singing routine required to get Auden to sleep, and the expert ninja moves I had to do to avoid creaking floorboards that could disturb him when he finally was asleep, well, I still feel like I've won the baby-sleep jackpot.

It's weird to feel already like your baby-ness is slipping away. Today I saw a new-born at the library, and felt momentarily wistful for that time. You're so feisty now, so busy and so determined. It's pure joy to watch you learn and show me what you know. Just don't lose those yummy squishy thighs anytime soon, they are like desert to me.

I love you, baby girl.

I may have passed the statute of limitations on this story, but unless I tell it you're not going to appreciate what I mean when I say I haven't stopped blowing my nose since April.

So. Because I am totally changed and recovered, I can tell you my Confessions of a Mouth Breather:

I have never been able to breathe properly through my nose. Every so often, like on a cold day or, weirdly, on an airplane, both pathways would clear and I'd get a few minutes of uninhibited nasal breathing. But most of the time it was like sucking air through a straw that's been chewed and flattened. And knotted.

I thought maybe I just wasn't trying hard enough, like my nose was a lazy muscle and needed a stricter regimen of exercise. Before bed, lying flat on my back, I'd concentrate on long slow breaths through my nose. Inevitably I'd get that panicky feeling of NOT ENOUGH AIR in my lungs and would give up entirely, resigned to another night of dry mouth.

I was extremely self-conscious about it: ashamed of sounding perpetually nasal, chewing with my mouth slightly open, snoring. But I didn't think there was anything I could do about it, so it just got added to the list of Things That Make Me Different (below "hate onions" and "cry in front of the mirror").

Oh, the things you normal people take for granted! Keeping your lips gently pressed together at all times while you breathe!

And I probably would have gone on like this all my life, not knowing it was only structural and could be changed.

Then one day the lovely woman who facilitated the mama's group I went to in Milwaukee told us she'd be out for surgery & recovery the following week. When she got back she told us all about it: she had never been able to breathe through her nose, she said. She'd had sinus surgery; now it was fixed.

I tell you what, I know I'm prone to exaggerating, but damn. A light positively dawned on my head. Aimed at my nose.

Of course, right at that moment, I was very newly pregnant with Isla, so surgery for me would not be an option for another 81/2 months. BUT. Just knowing that there was the option of one day breathing through my nose, and not to mention the fact that we had health insurance through Jason's post-doc that would cover the procedure, was a light at the end of a very long nasal tunnel.

not a belated Halloween picture 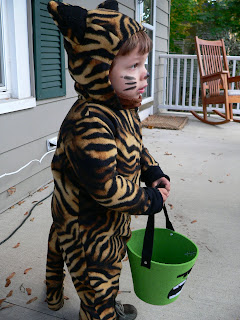 And I made that kid, too! I AM creative!

Last week I had an abbreviated "art day." It was "art hour." I managed to do a couple of swabs of gesso in a collage journal I'm keeping. I unpacked some canvases. I looked at the notebook of ideas I've been collecting for a year or more. I "showed up," as they say. I tried not to expect too much.

But I thought I'd post some pictures of the progress I made on the bone pieces last time I worked on them, and then at least to you guys it will seem like I'm still an artist!

When we left off, I was enamored of my new overhead projector, and starting to get the contour drawing situated on the canvas. One piece looked like this: 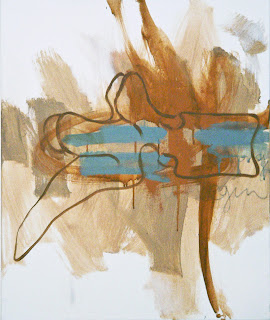 I wanted to rough it up a little, but still keep the paint strokes looking dynamic. 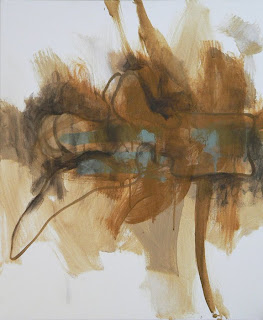 Then I realized I had to bring the bone form forward a little more, so it didn't get lost in the scumbled-up background. 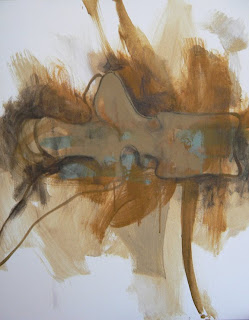 It's hard for me to be at a standstill at this stage. Based on the pictures, I like the first layer the best. It's like watching your sweet innocent newborn turn into a wily unpredictable toddler. On one hand you're like, my kid's grown so much and he's so smart and complicated and learning so much about the world; and on the other hand you're like, why can't I go back to the simplicity and ignorance and bliss of pure baby-dom? But then later you'll be like, ahhh the toddler years were SO EASY compared to this hooligan teenager! Enough of that metaphor. 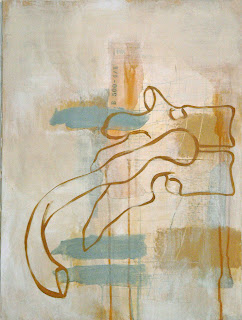 I got it looking nice and safe, which I can't stand, so then I went all botched skin-tone miasma* on it. Not in a good way: 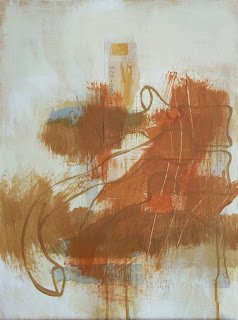 *credit to Jason for that official art term
I think I follow a fairly predictable arc, don't you? Tip the scales one way, then the other, then whooooaaaaaaa, back the other way, quick! Damn. Crazy artists. 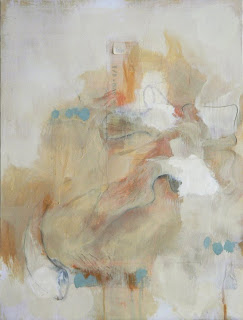 So, it's got some more interesting wash-y layers, which I like a lot, but no real focus. I'm hoping to do a little more texture in the background, and then bring the bones to the foreground again.

I do this thing to myself where I want all kinds of haphazard layers and pieces of things all jumbled together, but then I find some area I like and try to protect it. That causes the whole composition to seize up, and then I stall out, forcing things to fit where they don't. Then I sit and contemplate for a while.

Just kidding, who has time for that!

Stay tuned for the next layer!