there are no mistakes in painting

...but there is still plenty of pain.

A few months ago I finished a commission that I had started before Auden was born. I remember stretching the canvas when I was hugely pregnant, and I remember carrying a tiny sleeping Auden in the Bjorn for hours while I slapped paint around, week after week. The piece survived the move -- oh the hand-wringing of packing your own art -- and hung around, neglected and not changing, for months while I tried to find my groove again.

I had a stormy relationship with this painting for most of its evolution. I fought with it. I pleaded with it. I resented it. I got sudden bursts of creative clarity, tried something new and bold, and then just as quickly changed my mind and despaired of ever finding a resolution. Have you ever read Mary Shelley's Frankenstein? It was kind of like that.

Sometime around February or March, the piece quietly found its equilibrium. After a few weeks of seeing it on the wall, I realized I didn't want to do anything else to it. Not only did I no longer hate it, I was surprised at how luminous and textured the colors had become. And just like that, it was done.

Now the painting is safely in its proper home with its new family, so I can share with you the process in all its gruesome glory.

Here is the first step, a thin wash of color to map out my composition. We were going for an abstract landscape. I actually kind of like this one the best: 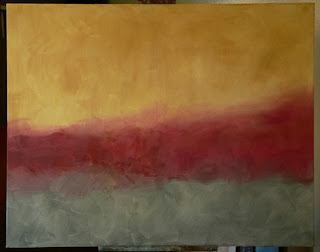 Originally I planned to break up the ground area into several cells of warm colors, contrasted by spots of cooler greys and blues -- an idea similar to a series I did years ago inspired by the lovely and translucent stained-glass look of petrified wood (from the forest in Arizona, of course): 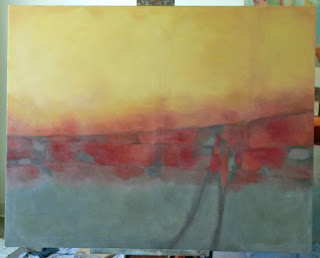 That looked too tight and constrained to me, so I started to break up the field a little, and also lightened it up. This is where it started to get circus-y: 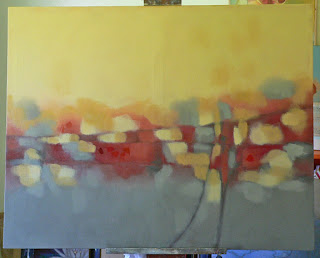 Ack! Time to turn it down a notch: 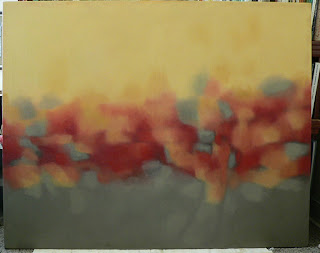 It was like that for a long time. In fact, we have a picture of me in labor with the painting, at that stage, in the background. You can imagine that after BABY OH MY GOD BRAND NEW TINY BABY there wasn't a whole lot of painting happening for a while.

So maybe it was the postpartum hormones that made me take this next step. There was too much red and orange, I wanted to bring in more earthy greys and tawny browns with just highlights of bright color: 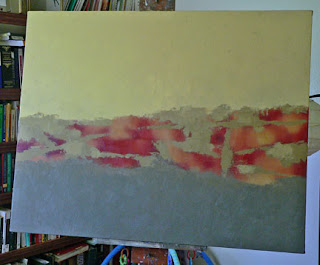 This next phase was affectionately dubbed "massacre on the beach" by Jason (he always comes up with clever titles for my work): 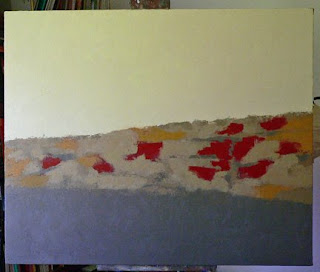 Yeah. So obviously that was not the right shade of red. Or maybe it's the red plus the yellow ochre that makes it look like a fractalized Ronald McDonald? Meanwhile the sky area was getting lighter and more opaque, mainly because I am heavy handed with the palette knife.

In the next stage I softened the colors again, and introduced some horizontal lines, hoping to create something dynamic in the middle. Still, that red, though. Oy: 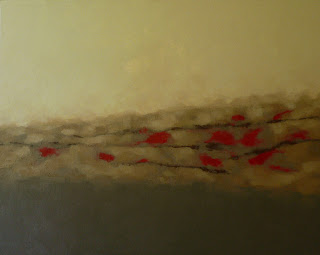 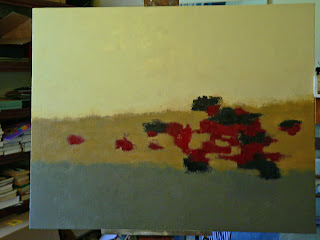 Sigh. There's the experimenting, and then there's the recovering one must do afterward: 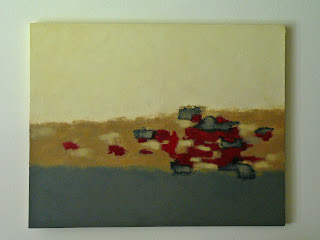 After that phase, I forgot to take pictures after each of the last few painting sessions -- a terrible oversight -- so the finished piece looks like it came out of nowhere. Basically I figured out that all the palette knifing had given the paint a heavy, thick, lifeless quality; and that I was really fighting to keep the red as well as that slanted horizon.

I did a small mock-up in my sketchbook, trying out some different colors so that I wouldn't keep guessing on the large scale. I tried lighter lights, darker darks, and added some swipes of cerulean (possibly my all-time favorite color). That combination looked so immediately harmonious and effortless that I knew I had to let everything else go.

For the final step I painted with a brush in thin glazes (oil paint mixed with galkyd), and only used the palette knife a little bit to create some pebbly texture right at the horizon line. A subtle brick red blended alongside a dark umber turned out to be all the red I needed. The yellow ochre, too -- thinned out, quieted down, and dispered into light bands -- found its right relation.

The grey at the bottom became more dynamic through all those layers, too, with soft variations in hue, and a few spots where the ochres are reflected from the middle. 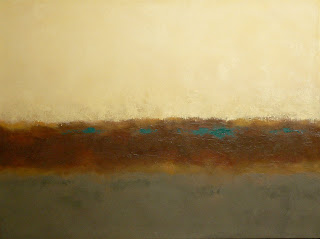 I was so worried throughout the whole process that I was just messing up, over and over, and would not be able to redeem it. This, I am convinced, is why painting is so hard: it takes a huge dose of faith and self-confidence every time I sit down at the easel. If I don't like something, I have to let it dry and let it be ugly and trust that somehow -- somehow! -- it will be important to the finished piece.

And so. All that palette knifing, all the texture, all the wrong colors underneath, all the layers added up to these quiet fields of undulating and luminous colors. I swear every time it happens it wasn't me, it was magic.

Email ThisBlogThis!Share to TwitterShare to FacebookShare to Pinterest
Labels: painting

Email ThisBlogThis!Share to TwitterShare to FacebookShare to Pinterest
Labels: baby

Oh, hello -- June? Is that you? I didn't even recognize you! Did you change your hair? No? Hmmm. Maybe it's the brisk 60 degree weather? Come on June, no need to pretend you're April. You're waaay warmer than her.

Okay. What I really wanted to tell you, aside from the fact that I've been too cold to blog all month, is that Auden is becoming a signing genius.

We've been watching baby signing dvd's every day for two months, and the only progress I noticed was my own increasing annoyance at the host's maniacal smiling. Oh, but she's effective. If I sing the theme song -- join in if you know it: baby, baby, baby signing time! -- he'll run to the TV, going "BEH-beeee, BEH-beeee," and insist on watching it. The other day I absent-mindedly sang the song about moms and dads, and I'll be darned if he didn't stick his little chubby thumb to his forehead and sign "dad."

His first and most vigorous sign was "dog" (an easy pat on the leg), which he does ALL THE TIME. He did "cat" for the first time on Monday while looking at a picture book, and then beamed at me, cleary pleased with himself. "Bird" is a favorite, too, I guess since we see a lot of them. He does the sign backwards, but we know what he means:

He does it when we go outside, he does it when he sees the fake seagulls hanging from the ceiling at Trader Joe's. The other morning, he did it at breakfast, totally confusing us, until we realized he was looking at this: 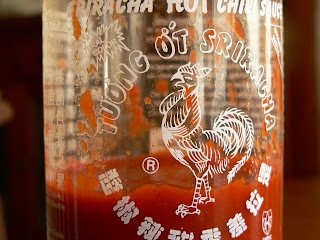 Every day he pulls out a new one: Tuesday it was "shoes", Wednesday it was "truck". Or maybe it was "bus". We'll say any big vehicle that makes a loud noise.

It's so awesome to watch him put it all together and get excited to tell us about what he sees.

And here's this, only because it's totally cute: