When I selected winners for my portrait project, I hadn't considered what to do if the winner had a sibling... but of course it only made sense to paint this sweet face after I did his brother: 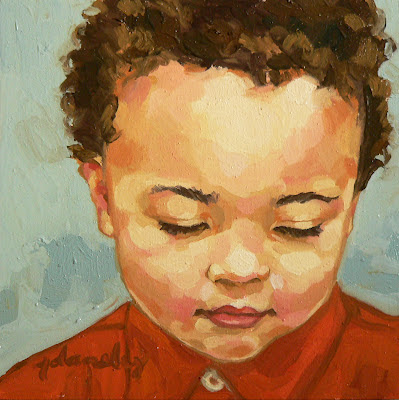 I think this is my favorite so far. I love the brushwork and the softness of the expression. I worried at first that the down-cast eyes would make him look asleep, but no.

There are more coming along, too, stay tuned!

two and some change

You turned two a few thousand moments ago, during which time I have been caught up in my usual whirlwind and too busy to write. Plus you keep changing, and I forgot that all this amazing growing up happens at two -- TWO -- so suddenly you're ferociously independent and stubborn and dramatic and some of the whirlwind is your making, my darling.

So don't think we didn't notice that you turned two. Or that you didn't notice, either: all the presents you got were immediately dubbed your "happy birthdays" and if anyone asked you how old you were, you emphatically stated, "Ah FOUR." We celebrated by taking you bowling with our friends, and you said, "Ah knock-a down-a PINS!"

I wish I could bottle up and preserve your little voice, how it sounds right now -- and the way you say certain words, like "more", which sounds like "murr" but rounder and sweeter in a way I just can't imitate. Pockets are "pocksit" and blankets are "blanksit," and if there are more than one, there are "one two free four five sick seven eight nine TEN! Dat how many, mama?"

You are very patient with us when we ask you about things:

You are adorably affectionate:

And you are suddenly well-versed in the art of the stall at bedtime:

You just started saying "because," which, you seem well aware, makes your sentences so sophisticated. But you pronounce it "pahcuz," so it just sounds ridiculously cute:

"Ah gatta get it, mama, pahcuz I gatta see it."

Speaking of sophistication, you say words like "actually" and "frustrated." Maybe you really did turn four? My sense of time is totally skewed, so it could be possible.

You love ballerinas and princesses, and The Little Mermaid has been playing on endless loop for the past week, but you also like pirates and monsters and super-heroes along with your brother.

Most of the time you play along patiently when he wants you to be his squire, or Rogue, or a Sentinel, but you have a fierceness about playing -- and being -- your own way, too, which usually manifests in spitting matches or in arguing about every last detail. You don't even know what you're insisting on, but you know you must insist:

You eat like a sumo wrestler and still weigh only about 22lbs. You are a tiny little lithe thing, and you love climbing and hanging from monkey bars. We've been going to open gym at a gymnastics club, where you "hang onna bars and jupp onna trampLEEEN!"

You are smart and goofy. You get the hiccups when you laugh. You hug everyone with your whole body. You like to hide under my covers in the morning, pretending to be a cat.

ABC's? SO two thousand moments ago.


The other day we went to the park with some friends, one of whom is six years old. You were watching her play, and you said to me, "Mah grow up like Jane, mama?"

Not just yet, okay?

Doing my best to keep up with you,
Mama 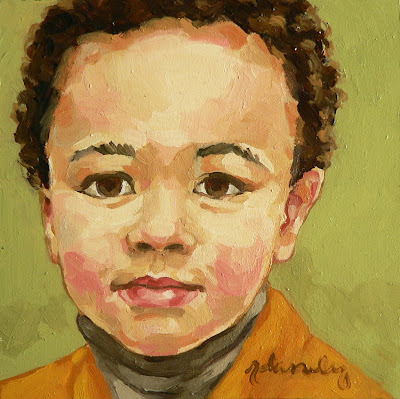 It's been really exciting for me to see how these turn out... I did his brother Zane, too, I'll show you that one next!

Here is one of my winners from last week's contest, Aaron's son Laird: 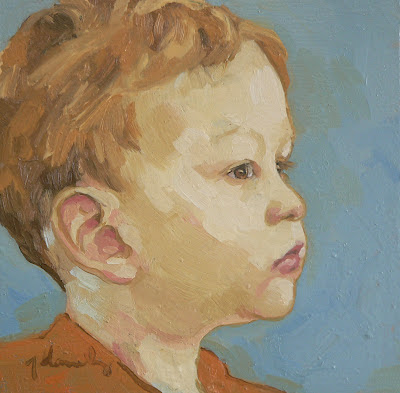 It's nice working on this small scale -- I can get a painting done in an afternoon! It turned out so sweet, I'm really pleased.

More portraits on the way... and I want to do one for you, too! Contact me for details.