I've had the idea for this painting in my head for more than year.

At some point last spring, I took some pictures of the kids in the bath, and loved the look of them: their perfect little bodies, so busy in the water.

I kept putting it off, mainly because I was busy with portraits, but also because I kind of knew that it was going to take something that I didn't have right then. I was aching to break out of my usual fussy, dense, perfectionistic line-making, but at the same time my stomach would tie itself in knots when I thought about having to render a likeness -- whether it was someone else's kids or my own.

So, as clear as this idea was, and as much as I wanted to try it, I waited.

After we packed up shop in Providence and came to Michigan for the summer, I was sure I wouldn't have much time to paint. But I brought several canvases with me, just in case, and as soon as we got here, I sort of threw myself at them... taking an hour here or there to just slap some paint on. This is what I had been doing all winter, I realized -- experimenting, playing, learning.

All those little steps, all those half-finished canvases! I had been assuming that any breakthrough in my work would happen dramatically, all of the sudden, in one flourish. So I wasn't looking for it as it unfolded quietly, one afternoon after another.

I've had very few pieces come together as effortlessly as this one, and as closely to my original vision: 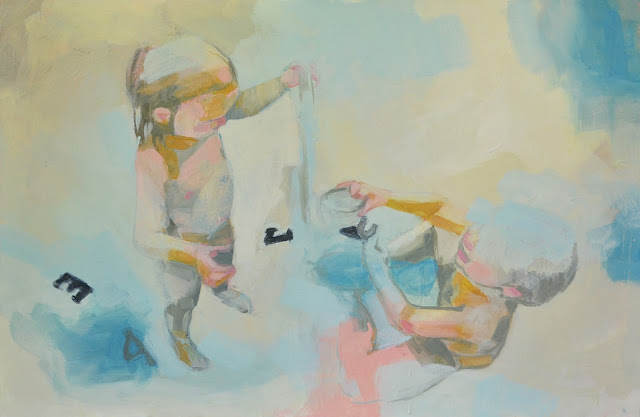 It's funny, because the substance of this breakthrough, which I thought for sure would express itself as unbridled passion and furious productivity, has instead manifested as an almost accidental patience.

At the beginning of the summer, a painter friend wrote to me, Your art will come when you're ready.

It was a huge relief to read that, because I usually fall into the trap of thinking that I'm only productive if the paint is hitting the canvas, and dismiss everything else as extraneous. I focus all my attention on arriving, and resent the entire journey. I want to KNOW, and then DO.

Clearly, I've had that backwards.

First I do, then I know.

Posted by Robin Danely at 9:57 AM No comments: