Oh hey! Not much, what's up with you?
.
I've been hiding out, trying to force February to pass through sheer force of will, but the shortest month just takes its sweet time no matter what. There have been many colds! Some puking! Some snow falling and then melting! I know, it's pretty special.

It takes a crazy amount of energy to get out the door every morning, and I'm blaming it on winter. It's like herding cats, and then trying to force them into snowsuits and boots. And strapping them into carseats. And then they're crying and whining cats. I get my undies all in a bunch and invariably I am close to blowing a fuse before we even make it to the car. We're going somewhere that you LIKE, dammit, hup hup hup!

But more than I am sick of winter I am sick of hearing myself whine and complain. I'm worse of a toddler than both of 'em put together. So I'm going to highlight some of the better things that are happening around here:

Auden talks to toilets. At some point one of us must have called the automatic-sensor toilets "robots," so now that's what they are, and they should be properly thanked for their services. Yours truly provides the voices, and you can imagine how awesome it is to be a talking robot toilet in a public restroom. If it's the kind of toilet with a good old fashioned handle, it's a "manual robot." In fact, a lot of things are getting that descriptor lately: his phone is now his "manual phone," his step stool is a "manual stool," and the other day he even told me he was going to clean up a mess with his "manual teeth."

Isla is signing like crazy, but most of her gestures are basically variations on a finger to her mouth, which makes them kind of like the signing equivalent of homonyms. Kitty? Finger to the mouth. Horse? Finger slightly higher on the cheek. Water? Finger in the mouth. Mama? Palm to the mouth. Other signs, like fish and dog and giraffe, which have nothing to do with the vicinity of the mouth, she executes with dramatic exaggeration, the way they always tell you to MAKE THINGS BIGGER WHEN YOU'RE ON STAGE! BIGGER! EVEN BIGGER! It's hilarious and mind-blowingly cute.

She adores books, as long as they have animals in them. Preferably barnyard animals. She hasn't said any recognizable words yet, but she's trying her best to crow like a rooster: "cock-a!" she says. "Cock... cock-a!"

For a little while there was some confusion about head-shaking. If she wanted something she couldn't have, I'd shake my head and say no. She must have associated the head-shaking with her wanting of the forbidden object, so in another context if you asked her if she wanted something, she'd shake her head but actually mean yes. It was kind of like a "Who's On First" routine of befuddlement. But now she's figured out how to nod, and she does it with her whole body. It cracks me up every time, not least because it's awesome to communicate so directly. We can have whole conversations now!

Speaking of conversations, we had this one in the car the other day:

There's a lot of utter nonsense in Auden's vocabulary, probably because he watches too many Japanese movies or too much Spiderman or because he's almost three. He'll prattle on in Lewis Caroll stream-of-consciousness, describing what his characters do:

(And the mome raths outgrabe!)

And my personal favorite, an exclamation that I've adopted for my own personal use:

Every so often, Auden and Isla will actually engage and play together. Mostly it's just toy-stealing and pushing, but then there will be moments like this:

I need to remember these particulars, otherwise I'm only going to look back on this winter and see my unending funk, accumulating and thawing and accumulating again. The things that seem so huge will not matter. The small things will be tilled into loam. And of course I'll marvel at how fast it all went.

So, how about you?

It's the scarf that never was! My very first knitting project, turned into something useful after all. 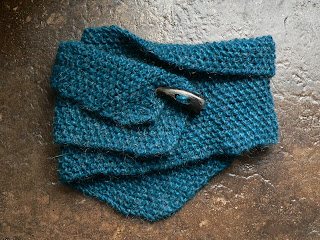 It's not a cowl, because it's not one continuous piece, but it's not a scarf either. I discovered there is such a thing as a pidge, which this most resembles. I turned a dropped stitch into a button hole, and sewed the opposite end to the inside edge. So here, an accidental pidge: 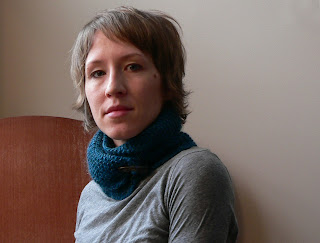 Cerulean blue is my all-time favorite color, and it predominates in my wardrobe after black and gray. I'm trying to diversify, really. Ask my sister: I have like four green sweaters now. Green!

Anyway, I have a metric ton of this wool left, so this accidental pidge is going to my gorgeous friend Kathy in Kyoto, who just had a birthday, and has some seriously sassy Zara boots that will match nicely. 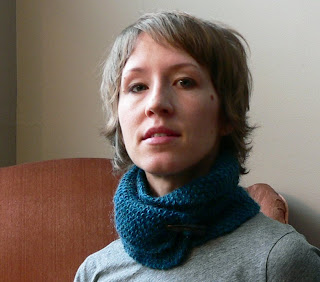 Maybe I'll make another one on purpose.

I am under Isla's spell. I will make any number of cute things for her.

Most recently, the darling Pixie Cap: 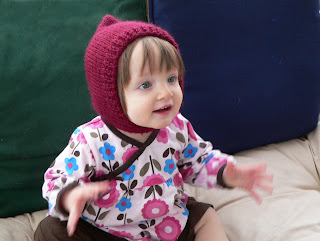 I joined a Ravelry group by the lovely and talented Wood over at Woodcraft, and I love how a lot of the projects are easy enough for me to even want to try them. This pattern is just a rectangle of stockinette that you fold and sew up the back... 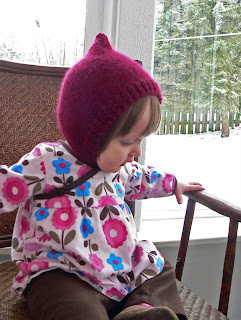 ...and then attach an inch-wide strap along the bottom bottom, with a little button to secure it. 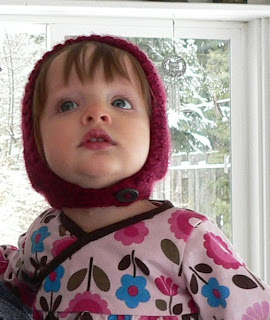 I love the shape -- it keeps ears warm without getting in eyes, and it looks like a little hershey's kiss, too. I could eat her up! Well, I could do that with or without the hat.

Today I take Auden to play outside in the snow, and work up a sweat shoveling paths in the backyard so we can run through the maze. Come in, make the obligatory cup of hot cocoa, and when Isla gets up, hustle to get snacks packed and kids suited up to go to the Kroc Center.

Auden runs all over the house when I tell him it's time to go. Isla wants to nurse again. I'm hungry already. The car seats need to be buckled in, and then the kids. Two bags. Brush snow off the car.

Get to the Kroc, wrangle them inside, Isla squirming and Auden dawdling, wrestle them out of coats and boots, deposit them in child care. Work out for exactly 24 minutes while watching lame TLC programming and letting my brain be mush. Hustle to take a shower and get dressed in order to pick up the kids by 12:30pm. Couple minutes late; the child care people give me looks.

Haul coats and bags and children to lobby, give Auden milkshake, Isla wants to nurse again. Try to give snacks, facilitate mess-making instead. Change Isla's poopy diaper. They take turns getting wet in the fountain. I squeeze Isla between my legs while I put Auden's coat on. Oh! Now he has to pee. And where are his boots? Fucking hell.

Kids and bags and boots all back out to the car, buckled in, songs requested, chubby hands full of crackers. Sweating again.

I've got a lot of slippers in the works, production-line-style, for the many ladies in my life, but these are for me: 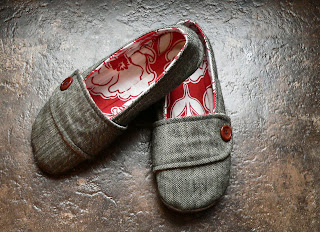 I'm getting a feel for the materials, and getting better at sewing around the picky curves. 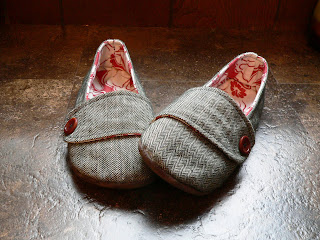 The herringbone is from a thrifted skirt, and the lining -- possibly my favorite part -- is a Donna Wilder design from the fabric store. 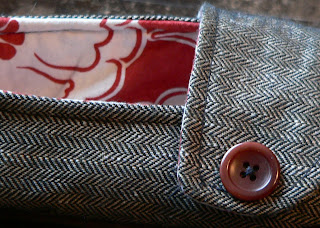 This time I didn't even bother with the velcro, because I can slip them on and off without moving the flap, so I just sewed everything together. The top-stitching detail around the upper wasn't part of the original pattern, but I thought it'd look nice on these.

They're holding up nicely, and they are SUPER CUTE for wearing around the house. It must be that time of year: I'm itching to wear pretty, sleek flats but it is full-on boots weather . So. I can have my cake and eat it, too. Or something.

your trip around the sun

Isla, it was a slow magic trick that brought you from here: 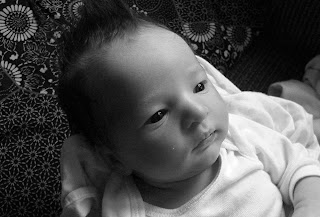 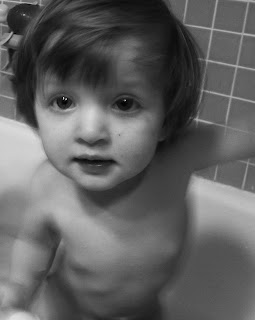