A few months ago I posted some new bone collages on Etsy. I have been fascinated by bones for years and have done quite a few pieces about them, but still felt a tad worried that they would be, I don't know, too morbid for mass appeal.

Not long after I put them up, a doctor friend contacted me and commissioned me to do a sphenoid bone in the same style. Okay, I said, as soon as I find out what that is. Turns out to be a tiny piece of sculpture in the middle of your skull, with arching, scooped wings like a pelvis, and strange little feet like a spaceship. I couldn't get a good rendering from the anatomy books I have, so Jason suggested I find a model and draw it from life (or, uh... death? Well, it's plastic, anyway). It was easier than I thought to get my hands on one -- thanks CraigsList! -- and resulted in a way better drawing: 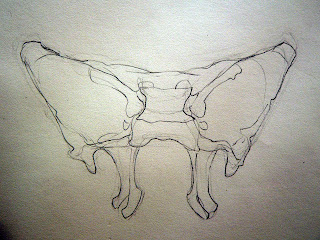 I started my ground by collaging on the canvas, using scraps of construction paper, old Japanese train schedules, and a funny German map whose lines echoed the graceful contours of the bone. Then I washed it lightly with gesso (click on any of these images for a big, detailed version): 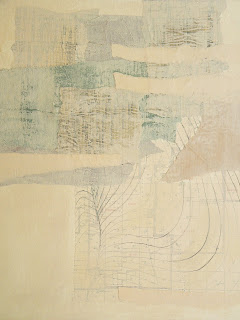 Next I drew the sphenoid onto the ground and painted around it with another light wash of acrylic, to make the bone stand out: 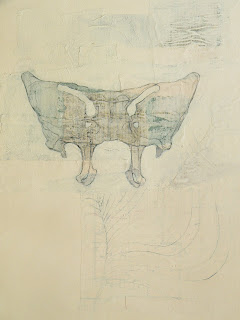 Then I coated the entire piece with encaustic -- a wax you spread on like frosting and melt with a heat gun. I love doing this, I have wanted to use encaustic for years because of this tool. It makes me look really serious.

I mixed some pale gray paint into the wax just above the bone, and it spread out like watercolor when the wax melted -- perfect: 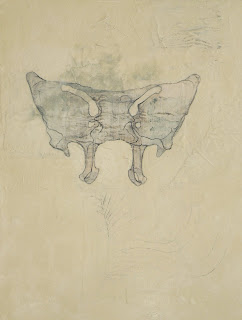 I had run out of the transparent brown tissue paper I used on the earlier bone collages, which is a shame because it was so useful, so I improvised (read: messed up) here with some other stuff. I had a piece of fiber-y paper that would have been just right if it wasn't so peach-colored... I glued it on and tried to like it, but just couldn't. I painted over it to soften the color a little, but that made it too opaque and cumbersome. I got frustrated and peeled it off, and discovered that the paint had dried enough to leave a really cool textured pattern behind. I repeated that a couple more times, then painted over it with a thin layer of yellowish-brown: 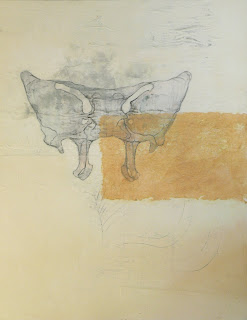 Finally, I coated everything with encaustic again, covering the brown patch and evening out the top layer. The wax gives everything a thick sheen, blurring the lines a bit and suspending them under a window the color of old book pages. It also reminds me of strange specimens trapped in apothecary jars, which is just right considering the subject: 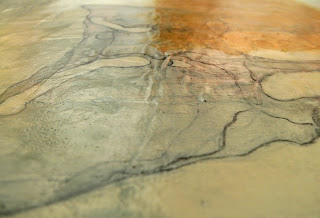 It was hard to get the color just right through photoshop, not to mention the warmth of it and the cool lumpy texture, but here's the finished piece: 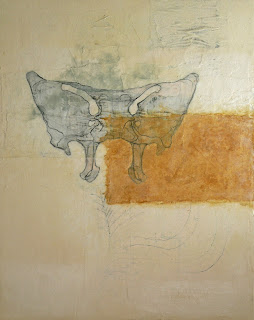 I loved it and almost didn't want to part with it... but I was thrilled to send it to my friend, and amazed at how effortlessly it came together. After my last couple of commissions, and, let's be honest, my painting style in general, I needed this kind of confidence!

My friend also mentioned an osteopathic convention he knows about, and would I be interested in maybe representing my work there? So despite the five hundred other ideas and projects I have going at the moment, I'm giving myself permission to work on nothing but bones for the foreseeable future.

Beautiful work, Robyn. Thanks for explaining the process. I can see how the encaustic would really work with the subject. That's amazing!
Also, you're looking fabulous!