A few weeks ago Jason and I watched the entire Planet Earth series straight through. Amidst all the marvels and the superlatives (damn you, David Attenborough, which is the deepest lake? the tallest tree? has the most biodiversity? the least? ack!), one random thought is sticking with me: why don't humans have an easy way to lie down?

I mean, nevermind the breathtaking footage of a mother snow leopard and her cub, gently shrouded in falling snow, nuzzling at the entrance of their den -- look at how comfortable they look just lying on the rocks!

What kind of design flaw is this? These are the things I think of when I'm breastfeeding Auden, lying on my side (propped by pillows, of course), in the middle of the night.

Ahhh, but it's wonderful to be in my own bed again.

We had a whirlwind visit to Michigan, where Auden was properly spoiled and cuddled by all his grandparents. Then we camped out at our new place in Milwaukee for a couple of nights (sleeping on an inflatable mattress, also not found in the wild), waiting for our stuff to arrive in a giant truck from California. Now we're waist-deep in boxes, going about the exhausting but rewarding task of settling in.

Auden seems to be handling all this chaos fairly well, despite a handful of wonky nights adjusting to the time change. He's even making determined attemps at crawling, getting up on his haunches and doing face-plants in order to move toward a desired object -- usually a plastic bag or his potty. Not that we let him play with those things.

At some point in Michigan he became swaddle-resistant, though, I guess because crawling is too exciting and one must also practice while sleeping. So now he can wiggle right out of the straight-jacket technique I'd perfected -- a regular Houdini, this one -- and rock n' roll to his heart's delight. With all the thrashing, papa ended up on the floor, and mama built a barrier around baby to prevent excessive kicks to ribs.

I'm sure you (and David Attenborough) have noticed that no other mammals swaddle their young. This is why the good Lord invented cribs, which are totally natural. I'll be eating my words in the next post.

But look! Here we are in our new city: 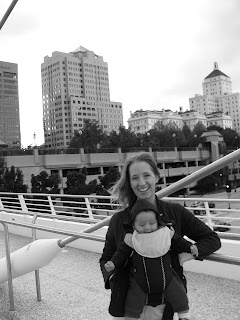 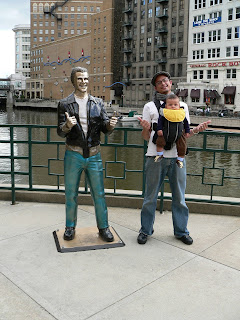 Email ThisBlogThis!Share to TwitterShare to FacebookShare to Pinterest
Labels: eating my words, Mid-West

Lack of body hair. once drinking and computers were discovered we lost all of it, now we rely on office furniture and the "fetal position" for our cowering.

"Bronze Fonz"- I am laughing so hard!!
Welcome to your new home. I hope everything is going well.
Kangaroos swaddle their young- they are nice and cozy in a human pocket-swaddle, no??
And, of course, I totally relate to everything you are saying about the un-swaddle and the rocking and rolling. No stopping them now!!
(Going to watch the video of fyour next post...)